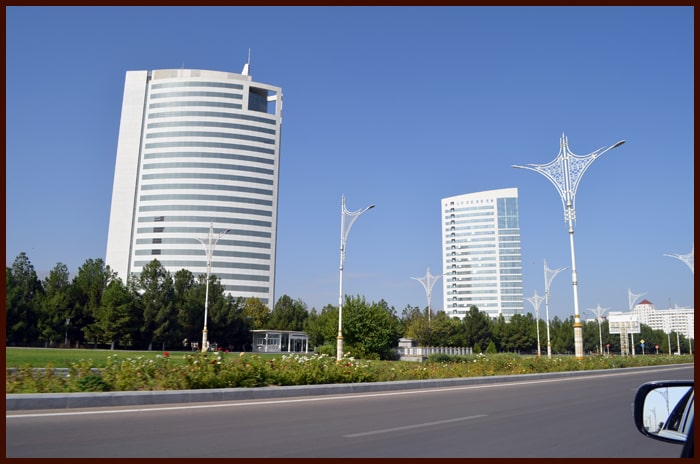 Title of tour: Riches of Turkmenistan

Day 1: Ashgabat
This day you will meet the guide at the airport and direct to Ashgabat. You will have a highlight tour today. You will start with exploring the ancient landmark Nisa fortress- the Sanctuary of Parthian Kings. In 2007 the site was declared as UNESCO World Heritage Site. Then you will discover Mosque in Central Asia Ruhy Mosque or Gypjak that is the largest in the Central Asia, Mausoleum of the first President of Turkmenistan.  Today you will have a chance to enjoy the views of the gem of Turkmen people - Akhal-Teke horses. This is a real treasure of Turkmenistan that they are really proud of. You will find the farm in Gokdepe region, you will also see the ride and races of the horse. After that you will return to Ashgabat. This night will be in the hotel.

Day 2: Ashgabat – Kov Ata – Nokhur – Balkanabat
This day you will have a wonderful trip to amazing Kow-Ata underground lake. The lake has a meaning as the father of caves. This unusual creation of nature attracts more and more people. Warm mineralized hydrogen sulfide water has made the cave a popular folk place, which is associated with hopes for recovery. The cave is 230 meters long, 65 meters deep from the main entrance, 50 meters wide and 15 meters high. Most of the territory of the cave is occupied by a lake. It is 72 meters long, 30 meters wide, and has an area of 1000 m2. The water temperature is from + 33 to +38 °C all year round. Then you will transfer to Nokhur. It is inhabited by the Nokhur mountain tribe of Turkmens, who have preserved their unique culture, traditional crafts and unique architecture over the centuries. In the West of the Kopetdag range, there is an extraordinary region of beauty and culture. These are two- floor houses of original architecture of severe beauty, laid out on the slopes of mountain stone, among picturesque vineyards, almond and pomegranate trees. Then you will transfer to Balkanabat. You are going to spend the night in the hotel.

Day 3: Balkanabat – Yangykala – Gozli Ata – Turkmenbashi – Avaza
In the morning you will have amazing driving to Yangikala canyons. One of the most interesting natural monuments is located 165 kilometers from the city of Turkmenbashi in the Balkan province. From Turkmen yangikala translates as “fire fortresses”. The gorgeous canyons are surrounded by sheer walls of purple-red, ochre, yellow, white and fiery red colors. Most travelers try to visit the beautiful Kemal Ata canyon. Here there is a spring, to which sheep and camel herds are driven to drink. It is believed that Gozli Ata was a respected Sufi who lived in the early 14th century. His Mausoleum is a brick edifice with two white domes, stand in an old graveyard with many handsomely carven stone burials. The two-headed construction of the grave has to take into account the length of the tomb: a triangular prism, perhaps three graves in length. Then you will drive to Awaza. This night is in the hotel.

Day 4: Awaza – Ashgabat – Mary/Merv
This day you will drive to airport for your flight to Ashgabat. Upon arrival you will experience Abiverd. In the middle ages, Abiverd was an impregnable fortress designed to save the population during nomad raids. Abiverd is one of the eight historical reserves of Turkmenistan, along with Koneurgench, Nisa, Dead, Dahistan. After you will drive to ancient Merv. The oldest city in Central Asia, which stood on the Bank of the Murghab river in the South-Eastern part of Turkmenistan, 30 km West of the modern city of Mary. In ancient times, it played an important role on the Great Silk Road. Today you will also explore such sights as Gyz Gala, Erk Gala, Soltan Gala, Soltan Sanjar Mausoleum, Ibn Zeid Mausoleum. Then you will transfer to Mary city. You will spend the night in the hotel in Mary.

Day 5: Mary – Margush – Ashgabat
Today you will experience the Oasis of Merv - the 5th center of civilization. The word "Margush "was transcribed by Greek authors as" Margiana", in the Holy book of the Zoroastrians" Avesta", the city was referred to as"Mouru".Some scientists believe that it also included the entire basin of the Murghab. In the second century BC, Margush became part of Parthia. Under the rule of the Arsacid dynasty, Margiana's life began to flourish. During this period, a new 7-meter-thick wall was built in the capital, Antioch. The dominant religion in Margush was Zoroastrianism. Small terracotta statuettes depicting local female deities were very popular in Margiana. Thanks to ancient written sources, the Eastern academician V. V. Struve proved that Margush was located in the Murghab river basin in the South-East of Turkmenistan. Then you will direct to  Ashgabat city. The overnight is in the hotel.

Day 6: Ashgabat
After breakfast you will have amazing city tour in Ashgabat. During the tour you will explore such interesting attractions as: Revival Park, Russian Market, Lenin’s square, Ertogrulgazy mosque, Park of Independence, Arch of Neutrality.  Then you will go to Museum of Ethnography and Museum of Fine Arts. The night will be in the hotel.

Day 7: Ashgabat – Damla
This day you will travel to Damla village. It is situated right in the heart of Karakum desert in Turkmenistan. There you will have a chance to explore traditional Turkmen life. There about 60 dwellings in swirling sands, local people calmly engage in their daily lives. You will see the ancient village and explore the lifestyle. This remote village makes this place more fascinating. Don’t miss chance to have photos and enjoy this place and harmony. You will rest the night in the tents.

Day 8: Damla – Darwaza
Today you will transfer to Darwaza gas crater that usually people call as “The Gates to the Hell”. Before you will observe 2 craters. The craters are situated in the village of Darwaza, in the west of the main road. The crater that you will see first with a large hole that is surrounded by a mental barrier. You will smell smoke, but you will not see fire. The second crater you will find about 18 km south of Darwaza. Talking about Darwaza we can say back in 1971, Soviet geologists discovered a huge amount of gas accumulations in this area, underground. While drilling a well, geologists came across a void in the rock, causing the earth to collapse, forming a huge hole that was filled with gas.  This crater does not have fire, nor does it have a pungent odor. Instead, it is partially filled with water through which the gases gently rise. You will be able to watch the flames. You will see an incredible picture that takes your breath away. In the dark, fire breaks out of the ground. It's like being the hero of a science fiction movie. This night will be in the Night is in camp.

Day 9: Darwaza – Ashgabat
This day you will drive to the capital Ashgabat. Today you will explore Annau “Seit Jamaleddin Mosque", this is one of the important site that attracts a lot of travelers. The ruins of the 15th century Seyit Jamal ad-Din mosque. Then driving to Ashgabat.