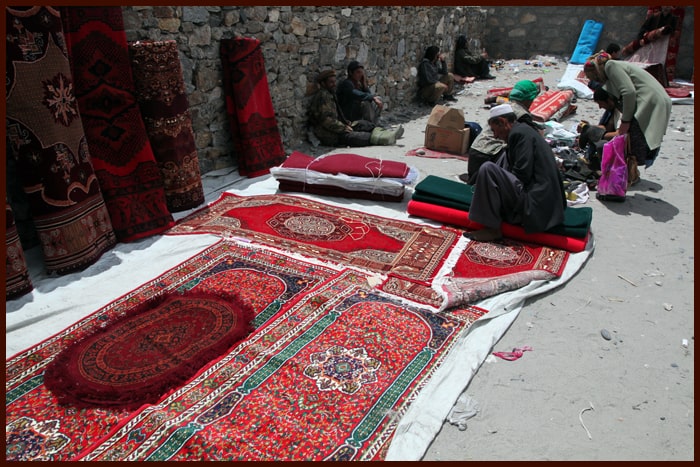 Title of tour: Origins of Tajikistan

Day 1: Dushabe – Hissor – Dushanbe
You will meet our company at the airport and drive to Dushanbe, but our first destination is Hissar Fortress. The Hissar Fortress, also known as the Hissar Fort, is one of the most interesting historical sites and one of the most famous landmarks in Tajikistan. Located less than an hour’s drive from the Tajik capital of Dushanbe, it is also one of the country’s most popular tourist attractions. Spend a couple of hours exploring this renovated ancient wonderland with its stone walls, impressive gateway, and landscaped gardens overlooking the town of Hissar. The Hissar Fort Tajikistan has an interesting history that spans over the course of 2,000 years. The adjacent Hissar Town was once one of the main trading posts along the Great Silk Road between Termez and Kashgar until it was absorbed into the Khanate of Bukhara. Built on a hilltop between two mountains alongside the Khanaka River, the Hisor Fort was designed as a fortified royal residence. Throughout its thousand-year-old history, however, the Hisor Fort has been captured 21 times and destroyed several times by various invading armies and emperors. The Hisor Fort as it stands today was built to replace the 16th-century fort that was destroyed by the Red Army invasion. In the years since, the Hisor Fortress has been rebuilt, adapted and reconstructed. As a result, the fort as we know it today resembles precious little of the original formidable Hisor Fort that once towered over the valley. We will keep travelling to monuments of “Madrasa I Kuhna” (new school of 16th-17th centuries), mosque; the mausoleum of “Mahdumi Azam” (16th century). After arrival in Dushanbe, you will have a lunch. Further we will visit Botanical garden and Victory Park. The night is in a hotel.

Day 2: Dushanbe – Norak – Kalai Khum
Today we will travel to Kalai Khum village. Also you will observe Norak water reservoir which is calles “Tajik Sea”. Located on the banks of the Vakhsh River in the Khatlon Province, just 70 kilometers from the Tajik capital, it makes for a great day trip from Dushanbe. Today, Norak has lost some of its former splendor. After the collapse of the Soviet Union and the five-year civil war that followed, many people left Norak in the 1990s in search of greener pastures. Today, the industrial town mainly serves as a military hub for those working at the nearby Okno Window Complex or at the hydropower plant. However, while there are not many things to do in Norak, that is all part of its charm. A visit to the top of the Norak Dam is one of the best day trips from Dushanbe and the spectacular bird’s eye of the town is rewardingly peaceful. Overnight is in a home stay.

Day 3: Kalai Khum – Khorog
Today we will drive to Khorog. In Khorog, the Pamir highway branches: the Northern road goes through a deep mountain gorge straight to Murghab, and the southern road leads to the Vakhan corridor, the most picturesque part of the road, where historical monuments and colorful villages are preserved. Thus, Khorog is the tourist center of the Pamirs, through which all routes must pass. It is located at an altitude of 2200 meters above sea level, and is one of the highest cities in the former Soviet Union and the highest city in Tajikistan. In the evening you will have a dinner and spend the night is in a guest home.

Day 4: Khorog – Ishkashim
Today we will travel to Ishkashim village. Located near the Panj River on the Afghan border, the town of Ishkashim lies directly opposite a town of the same name in Afghanistan. A bridge connecting these towns was constructed in 2006, where the border has been sliced through the Pamir mountains of Tajikistan and Afghanistan. It's a small town that lies at the mouth of the Wakhan Corridor, a narrow strip of sparse grassland that stretches between some of Asia's highest mountains. The landscape here is bewitching; beautiful and remote with stunning views of the Pamir mountain range. The region itself is considered sacred and a number of historical and archeological sites are located in Ishkashim. Located on a branch of the historical Silk Road, known as the Buddhist Silk Road, the whole Ishkashim district beholds great cultural significance to the people of Tajikistan. Furthermore, a number of natural hot springs are located throughout Ishkashim, renowned for their healing and energizing properties. Overnight is in a home stay.

Day 5: Ishkashim – Yashil Kul Lake – Bulunkul Lake
The lake of Bulunkul is beautiful, but the large expanse of Yashilkul (Green Lake) outshines her sister thanks to its clear waters and wide surroundings. It was formed like Lake Sarez – although much earlier – by a natural dam created by a landslide. On the north shore of Yashil Kul, close to the mouth of the Great Marjonai river, there are prehistoric stone circles and several Saka (Scythian) burial sites a little further up the valley. Traces of ancient mining settlements (probably from the 11th century) can be found in the area. At the eastern end of the lake are the remains of a caravanserai (or tombs) and a hot spring at Sumantash (Bekbulat). On the route we will go through Koitezak pass. Evening dinner and night are in a guest home.

Day 6: Bulunkul – Khorog
In the morning we will drive to Khorog passing Pamir Highway. Discover the true landscape of Tajikistan as you cruise alongside the Panj river, with views across the border to Afghanistan. Dip in hot springs and marvel at ancient rock carvings. Enjoy real Tajik hospitality and food. Enjoy uninterrupted views of the night sky, from the peaks of one of central Asia’s most romantic mountain ranges. Dinner is in a restaurant and overnight is in a home stay.

Day 7: Khorog – Kalai Khum
The route from Khorog to Kalai Khum is the same as you passed before. Bid goodbye to Qal'ai Khumb and its friendly inhabitants and strike out on the road for the 160-mile drive to Khorog. The journey runs alongside the Panj river and across it lies Afghanistan. The beautiful and important city of Khorog lies nestled in the mountains at the meeting point of the Panj and Ghunt rivers. In these beautiful surroundings, spend the night in a private guesthouse.

Day 8: Kalai Khum – Khoburubot – Dushanbe
In the morning we will drive back to Dushanbe through mountain way. We will pass Khoburubot named as Western Pamir Tract. It includes stunning river valley where you can take a photos. Moreover you will meet locals and villages. You will able to learn more about culture. You will have a dinner in restaurant and spend the night is in a hotel.

Day 9: Flight
In the morning you will be transferred to the airport.