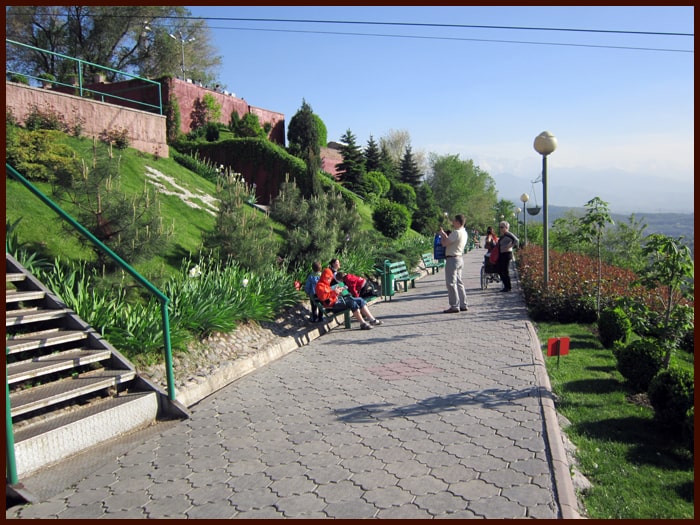 Day 1: Almaty
As soon  as you arrive, we will drive to the southern capital of Kazakhstan, Almaty. There will be a guided city tour. Firstly you will visit Almaty Museum, one of the oldest of Almaty parks - Park of 28 Panfilov Guardsmen, where one of the most beautiful wooden building in the world - Zenkov Cathedral is situated. Aftherwards you will go to the Green Bazaar where you can find everything according your wishes and wallet. You will have a lunch and then we will transfer you to Medeo Gorge which height is 1690 meters. It is also prominent as a the highest mountain skating rink in the world and the dam. It will be great relaxation walk around the area, breath fresh air and take a lot of photos in Shymbulak ski resort. Then we will continue our tour at the top of Kok Tobe hill. There is located the tallest TV tower in the world surrounding by wonderful mountains. You are free to stroll and enjoy panorama view. You will be impressed when we will make a short ride from the top of the hill by cableway. You will spend the night in the train Almaty – Taraz. Train #379T 20:16 – 08:11(This is subject to change.)

Day 2: Almaty – Taraz – Sairam – Shymkent
Our team will wait at the railway station after arrival in Taraz from Almaty. You will see important places as History Museum, Karakhan and Dautbek Mausoleum, Tekturmas Historical Complex, Akyrtas antient palace complex. Taraz is one of the oldest cities in Kazakhstan, the remains of which are hidden under the buildings of the modern city. Later on we will drive to Sairam, it is district of Shymkent. You will visit Ibrahim-Ata Mausoleum, Karashash-Ana Mausoleum, and medieval minaret. Sairam is the place where in the past was a Ispidzhab - one of the largest centers of the Great Silk Road in the Middle Ages. Moreover this place known as the birthplace of the great enlightener of XII century - Khoja Ahmed Yasawi. Mausoleums of his father and mother, Ibrahim-Ata and Karashash-Ana. Then we will keep travelling to Symkent. Accommodation is in a hotel. The night is in a Shymkent.

Day 3: Shymkent – Otrar Settlement – Turkestan – Shymkent
In the morning we will drive to Otrar Settlement which is far away about 220 km. The day is dedicated to a trip to the cities of the Great Silk Road – Turkestan and Otrar. In Turkestan is the Mausoleum of Khoja Ahmed Yasawi, a UNESCO world heritage site, as well as the small Mausoleum of Rabiga Sultan Begim Mausoleum Arystan Bab. Here you will also see ancient baths and other structures. The Muslim community considers Turkestan a Holy place, and visiting the Mausoleum of Khoja Ahmed Yassawi 3 times is equivalent to a pilgrimage to Mecca. The city of Otrar was destroyed by the army of Genghis Khan in 1219 after 5 months of siege. Despite this, the city was able to grow again and maintain its position as an economic center until the 17th century. The Otrar excavations are still accessible to the public today. Accommodation is in Shymkent.

Day 5: Shymkent
During the tour, you will visit the city center with its attractions. The city seems to be in the blockade of the oldest monuments of architecture. According to scientists, Shymkent is more than 2000 years old. This is an ancient city that emerged at the crossroads of the great silk road 10 km to the East. Initially, the city of Shymkent developed as a trade center between nomads and citizens. There is a special atmosphere here, which is manifested in the generous hospitality, openness of soul and emotional temperament of southerners. And all taken together creates a certain energy that permeates the air of the city. And this city has something to show its dear guests. You will visit park named after Sh. Kaldayakov, Monument "Jer Ana", Ordabasy Square, Park “20th Anniversary of Independence of the Republic of Kazakhstan”, Obelisk of Glory, Eternal Fire to the Fallen in WWII, Dendropark – optionally, the regional historical – museum, the ruins of the citadel of ancient Shymkent, pedestrian street "Arbat".  Overnight is in a hotel.

Day 6: Chernyaevka
There will be a breakfast at the hotel. Then transportation from Shymkent to Zhibek Zholy, Chernyaevka border.

Train Almaty – Taraz (4 berths per compartment) – from 40 $ per person